Point and click games -The way you interact should make sense.

Most people my age (30s+) that played a lot of games on their PCs, should know about point and click games and their moon logic puzzles. And on top of that, you had those interaction controls that had 3 different action buttons that could be combined in a single one, or had some actions that could have been done in different ways and would in-fact still make sense.

I'm not talking about using a fish that you found at the very start of the game on a robot that is waiting at the very end of the game, or for waiting the guy to go to the toilet and get wrecked by an octopus so that you can get his belt... (If anyone gets the references, you get a high five.)

I'm talking about having a walk command, while the game could simply take use the mouse pointer to where you wanted to walk, and even if you did click on an interactable object, simply walk to the closest point. Or if you had a fridge for example and had an "Open", "Close" and "Interact" commands, the open and close commands (while redundant) could do what they were intended to do, but the "interact" one should work as well; open the door if it's closed, and close it if it's open.

Same with inventory management. In almost all of point and click games you would eventually go to a point where you had to find a couple of objects and combine them to do something else. And in most games I've played of that kind (dare I say all?) the player would have to get both objects and then combine them in the inventory system. Why couldn't I just pick up one part of the object, go close to the second part that could be on a table and then simply "use" the first item directly on the object that is just sitting there? This issue is still present in some form in today's games, latest example I've personally seen being FF14. To give something to an NPC, I had to initiate dialog, and the game would then give me a small on-screen box to place the item in it, either by dragging the item from my inventory to the NPC's inventory, or selecting "give". Why couldn't I just drag the item from my inventory onto the NPC and then program the NPC to simply accept the item and respond with a "Thank you!" kind of a reply? (I'm not talking about point and click games where you have to solve a puzzle by using an item on a character, but on RPG games where characters usually want some items.) Screenspace to world space conversions can be done, so the game can indeed know if you are pointing at something. That's how mouse pointers work in 3D games and applications. (I have to clarify though, that if I remember correctly, I have seen a couple of games that dragging the item from the inventory on the character would give them the item, but as far as i could tell that is still not the norm.)

"You are splitting hairs dude". Well... you may have the best software out there in terms of what it can do, but if it frustrates users with the controls, or your users keep trying to do things differently, then perhaps the controls are not as intuitive as the designer may think and might need tweaking. It's why most 3D programs or photo editing/design packages ended up having similar controls. It goes back to the "you are not your clients" argument. It's only natural that the designer won't have any serious issues with their own interface, but any issues will come up when the client tests it. Case in point, the first pilots that tested the very first F-16 models. Supposedly the new flight system had a control stick that didn't move physically, but instead registered pressure along its axis depending on how the pilot was acting on it. You see the plane was using a cutting edge technology of fly by wire, which means that the pilot didn't actually control the plane's control surfaces but instead was sending information to a computer and the computer was keeping the plane in the air. The issue was that the pilots couldn't tell how much pressure they were exerting on the stick, the engineers at General Dynamics hadn't thought of that or didn't think that it would be an issue. It was the pilots that came back and said that the feeling needs to change as they couldn't tell how much force they were applying, which that would affect their flying. The solution was to add some leeway to the flight stick to move around.
No comments:
Email ThisBlogThis!Share to TwitterShare to FacebookShare to Pinterest
Labels: GUI, UI, UX 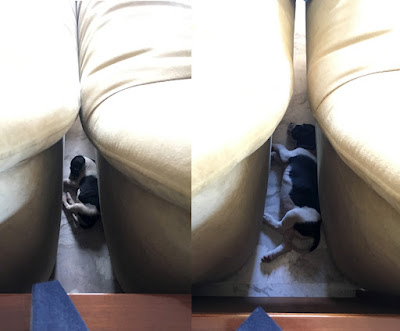 This little guy is just a month and a half old, with the two snaps taken just a bit over a week apart, and the left most snap wasn't even when he was at its tiniest.

So far he's the cutest poop machine.
The poop. God damn the poop. And the pee! GOD!
.
.
.
.
I'm petitioning for putting you in diapers dude...

In other news, it's video games day today. So back to coding stuff.
No comments:
Email ThisBlogThis!Share to TwitterShare to FacebookShare to Pinterest
Labels: puppy
Newer Posts Older Posts Home
Subscribe to: Posts (Atom)