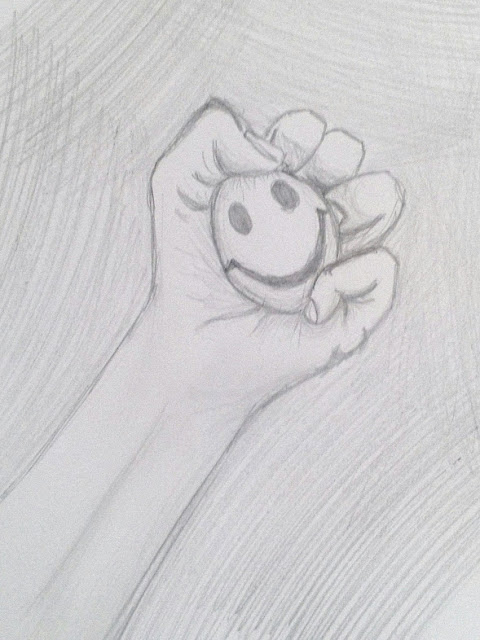 And I'm referring to the act of actually sketching this, not squeezing the stress ball.
No comments: Links to this post
Email ThisBlogThis!Share to TwitterShare to FacebookShare to Pinterest
Labels: ball, release, sketch, smiley, stress

With everything going "up in the cloud" and everybody offering digital distribution of a lot of different entertainment kinds, you'd think that physical media should die already. There's a service for almost everything. Music, books, films, games... if you really wanted you'd be able to do virtual paintball as well. Yeah it's convenient to have everything in one place, just a click away. Physical media is not dead though, or at least it shouldn't be from my point of view. Or at least stay as an option.

Before you say anything; no. My reasoning is not the "you only rent the files" (like amazon taking ebooks out of kindle devices after they didn't want to carry them anymore) or "if the service closes you lose them".

Remember when you got that new CD and would open the included booklet?
Those things had pictures of your favorite artist, lyrics and were in a style that suited the tracks. You were engaging your sight and touch as well as your hearing. (Yeah, I'll acknowledge that there were some pretty awful ones...)

The whole making of the package is really an art. It has to shout at you loud enough to make you notice that book/game/album if you are not buying something specific. In Morrowind you'd get a nice thick paper box that had a poster of the game's world. Or take a look on the limited release of Daft Punk's Random Access Memories album. Some of those packages are small works of art that can't be appreciated when viewed on a thumbnail on a screen. There is also something more direct and satisfactory when you finish a chapter in your favorite book and see where the bookmark is at once you close it, instead of seeing a bar at the bottom. Not to mention the smell. (old paper and glue smell.. mmmmm....) I wouldn't shy away from making a cover for something that will only get a digital release, but having something that I could grab with my hands is more appealing.

I also noticed that there's a bigger chance of me listening/reading/playing something that I see infront of me from time to time. Stuff that are in my hard drive have less of a chance since if I don't actually go and look at what I have, I won't be reminded of them. While stuff that are on a shelf or a place I go past frequently have a bigger chance of me going "oh yeah! still need to finish that boss." If I remember correctly there was a post from Steam on the number of games people haven't even played after buying them is high.

I really do like the ease of digital media and I'm not evangelizing of staying on old media like DVDs (digital media could very well go on small flash cards like the ones from Nintendo's portables - just at the size of PS2 memory cards only for making it easy to grab them and not misplace them.) but I really miss sometimes stuff that I can actually hold. Like in Space Quest 6, there's a scene where you get captured and need to make a distress beacon out of some parts you find there. The way of beating that puzzle was in a magazine that came in the game, that was supposedly a magazine in print in the game's universe. Sure it was a form of pirate protection but it was still nice to get it in that way.

Don't tell me that physical media is done for, especially with the stuff like Lootcrate and other similar ones where people get stuff in the mail or better yet with stuff like Indiebox that gets you indie games that previously only had an online release and they come complete with manuals and goodies.

No comments: Links to this post
Email ThisBlogThis!Share to TwitterShare to FacebookShare to Pinterest
Labels: digital, media, online, publishing

I was going to post something on physical media vs online distribution, but I guess I'll have to save it for later. Because Hard Rock Cafe (or at least a lawyer there) decided to send a copyright claim to a service a lot of people use for making t-shirts and other stuff for an image I did that seems to have offended their copyright. It was of a hard and sturdy rock, on a stage, with some speakers behind it.
Do notice that there was no use of the word cafe, nor anything imitating the style of the franchise like typefaces or colors.
It was just a dumb joke that had more to do with the music genre than the franchise... Seriously people need to calm down with all these "copyright infringement" notices. Especially when there's no copyright infringement. 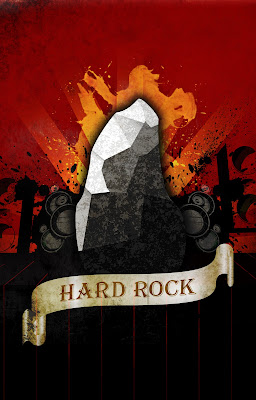 Pray tell, how is this infringing on the copyright of hard rock cafe? Is it just the word combination? Which btw is a word combination used to describe the properties of an object. Does that mean I can copyright my name and sue everybody else that has the same name?

If this is the case, then it's dumb, you shouldn't be able to register and copyright just a word or two and claim it as yours. It should be the whole thing with the logo and style included. If the image did include the same typeface as the one the company uses and had a circle behind it then yeah, I would be at fault.
2 comments: Links to this post
Email ThisBlogThis!Share to TwitterShare to FacebookShare to Pinterest
Labels: copyright, design
Newer Posts Older Posts Home
Subscribe to: Posts (Atom)